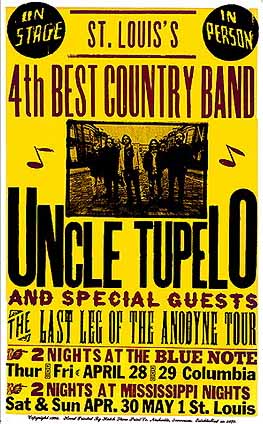 This band epitomized country/rock, country/punk, insurgent country, whatever you want to call it. They could blast and blaze and blow the roof off of a club, then turn around and be quietly acoustic, having you weep into your beer. They also did some of the best singing and songwriting I've ever heard in my life. The band broke up in mid-1994, but the two bands Wilco and Son Volt carry on the music, both old and new. And now I have two favorite bands. Here are lots of resources for fans of Uncle Tupelo/Wilco/Son Volt's music:

Uncle Tupelo on NPR,
Featured on Episode 14 of NPR's "All Songs Considered".


89/93 reviewed, plus another good interview with Mike Heidorn
by Renee Dechert, Pop Matters magazine, May 2002.

"Postcard"
The Uncle Tupelo/Wilco/Son Volt mailing list (or at least, it was when I signed off).
"Postcard 2"
Once known as "Passenger Side", -- the Postcard spinoff list primarily (but not exclusively) about alternative/insurgent country, country/punk and roots country music of interest to Uncle Tupelo (and even Wilco & Son Volt) fans and just about anyone else.

If you don't have an independent record store near you, you can buy all four of Uncle Tupelo's CDs right here, via our links to CDnow.com (now a part of Amazon.com, and amazingly still around, at least in fading name). Buying them here is not only convenient and inexpensive, but it also helps defray the costs of producing and maintaining this friggin' enormous web site. So buy 'em if you don't have 'em already, and buy some for friends and loved ones too!

"Down here where we're at
All we do is sit out on the porch
And play our songs, and nothing's wrong.
Sometimes friends come around, they all sing along."

-- from "Screen Door", by Jeff Tweedy

We like to do that with our friends, too.

Several folks from Postcard have done a really great job figuring out chords and/or tablatures for some of the songs. I had been plucking them from the list and archiving them at home, but then Steve Gardner had a lightbulb appear over his head and launched The UT Tab Project, in which various members of Postcard worked to figure out every Uncle Tupelo song for this archive. The archive was completed on August 29, 1996, when Dave Shapiro sent in the tab for "Discarded". Not a bad piece of work, folks.

We're working on the Wilco and Son Volt songs too, and those'll go on their respective pages as they're completed and compiled.

Please remember that the files presented below are the work of the author/contributor, and only represent an interpretation of the work of Uncle Tupelo. You may only use these files for private study, scholarship or research.

So, for your musical enjoyment, here's the Uncle Tupelo Song Archive:

Songs from the Rockville singles, and miscellaneous covers

Lyrics to the songs were never printed with the albums, and Postcard Mailing List founder and former owner Jake initially posted a first draft to the list, after spending hours next to the CD player zapping the pause button to get these all written down. They've been corrected and fine-tuned by several list members (especially Michael Pemberton, who spearheaded the lyrics correction/compilation) as best as we know how, and here's what I hope are the final definitive lyrics:

This page reflects lots of work done by people other than myself. Me, I just designed the interface and provide the web space. Hats off to all of 'em. (I hope I'm not forgetting anyone.) Here we go:

A million thanks to Michael Pemberton, former keeper of the Uncle Tupelo FAQ and creator of the amazing Factory Belt site; Eric Labow, who designed Factory Belt; plus Rick Cornell, Barry Kelley, Steve Kelley, Tom Krueger, Tim McGinnis and all the Taters.

Thanks also to Jake Roberts for creating the "Postcard" Mailing List; Dave Dewey for maintaining it now, Laura Levy, who maintains the "Passenger Side" list; Mark Janovec for sending some of the articles in; and Jamie Thingelstad for the album cover gifs.

Thanks most of all to Jay, Jeff and Mike; and John, Max and Ken for all the music.

This page is dedicated to the Taters.


Do you enjoy the Uncle Tupelo page?
If so, please consider making a donation to this site, to help pay the server fees!


bands | alt.country ... whatever
the gumbo pages | search this site